A Very Happy New Year to you.

St Paul tells us that there is, “in Christ neither Jew nor Greek, slave nor free, there is no male and female, for you are all one in Christ Jesus.” These words, written by Saint Paul 2,000 years ago, are central to the Christian faith. They speak of a vocation for the universal and point to an ethic of social justice and solidarity.

The Christian tradition’s account of the humble circumstances of the birth of Jesus, represented in the nativity scene, is in the same spirit, identifying Christ with the marginal, the maligned and the poor.

It has therefore, for many Christians, been depressing to witness the faith of our churches being used to justify the abandonment of such principles in our own country, in Europe, in the United States and beyond.

For liberally minded Christians, 2019 was the latest in a succession of anni horribiles, during which a cultural appropriation of our religion did service for aggressive nationalism, xenophobia, homophobia and anti-environmentalism.

All across Europe we have seen a move to extreme nationalism. In such countries as Poland where the country stands accused of breaking EU law by refusing to comply with a refugee quota programme, instituted in 2015 and has begun an aggressive anti-LGBT crusade.

In Hungary the government has systematically denied food to failed asylum seekers held in detention camps on Hungary’s border and have also made homelessness a criminal offence.

In Italy, Matteo Salvini, uses Christianity to pursue culture wars relating to migration and national identity. Support for him among practising Catholics is high.

The battle to defend the rights and human dignity of all, irrespective of gender, race or sexuality, is having to be fought all over again. But the theological roots of that liberal vision in a Pauline notion of universality – “all are one in Christ” – is rarely examined by progressives.

In an era when Christian ethics are being so brazenly twisted to serve nationalism and attacks on minorities, that could be a mistake. Happily, there are signs that this may change in 2020. In the US of A some of the Democrat candidates in next year’s US presidential race are wearing their faith on their sleeve to an unusual extent. Recently the influential US evangelical publication, Christianity Today recently called for Mr Trump to “be removed from office”.

Straws in the wind?

For both secular liberals and Christians, there are lessons to be drawn from what might be seen as a prophetic alliance between Pope Francis and Greta Thunberg on the most urgent issue facing the world: the climate emergency. When Time magazine made Ms Thunberg its person of the year, the Vatican was quick to celebrate her as “a witness to what the church teaches on the care of the environment and the care of the person”. Sadly a fellow priest told me the other day that he thought she was pathetic, that's how far the rot has set in! Shame on those who mock as Australia burns!

But as the reactionary right denigrates ideas of human dignity and equality that can be traced back to the first formulations of early Christianity, liberals of goodwill need to unite across the religious/secular divide in 2020. It is time that we stood up and were available to be counted. To take up our cross, the cross of righteousness, of love, a transforming cross of inclusiveness and acceptance.

Within St Cyprian's we sadly take time to say farewell to Fr Gerald who fought the fight and endured the slings and arrows of..... and is taking early retirement. On the 19 January there will be an opportunity to to say farewell and pray for him. He will celebrate and preach at the Mass and there will be a reception for him after the service. If you feel moved, and I hope you will, to donate to a collection please send a cheque to the church or hand your £50 notes to the wardens. Alternatively a bank transfer to the church account would be great. the Bank detail are: NatWest plc, Sort Code:  56-00-14, Account Number: 12138126,  Account:  Parochial Church Council St Cyprian’s

The PCC will convene on the 17 January and all members are requested to be present if possible, please? 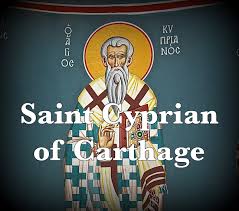